Elders and Deacons named in the
Gurabo, Puerto Rico Church of Christ 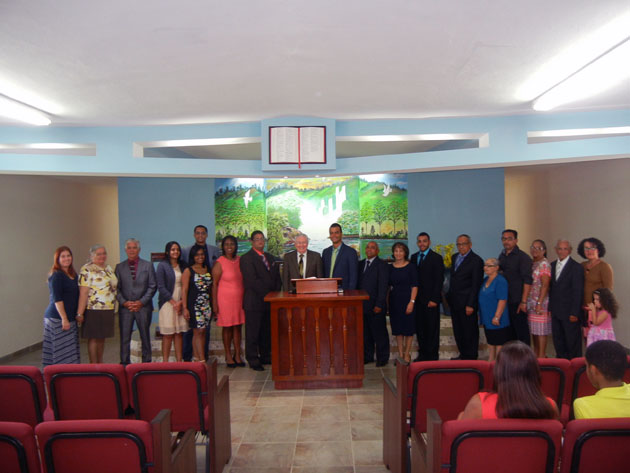 Three elders and two deacons were named for the Gurabo, Puerto Rico Church of Christ in a ceremony conducted after the worship service, Sunday morning, April 24, 2016. I am standing behind the pulpit. The tall brother to my left is Jesús Germán, self-supported teacher and evangelist. To our left, the three elders and their immediate families. To our right, the two deacons and their families.

The Gurabo congregation was begun in 1969, the original contacts being through a radio program I had on a powerful station in San Juan that covered all Puerto Rico and even parts of the Dominican Republic. At that time, my family and I lived in Bayamon, almost an hour’s drive from Gurabo. I gave some 85 studies in Gurabo before baptizing the first person. A number of denominational leaders participated in those studies, including Félix Roldán and Abraham Carrión, who were among the first converts, and now are two of the three elders. Scores of people were baptized in Gurabo during the first years of labors in that town and the area. No doubt, Félix and Abraham could have been constituted elders many years ago had not the wife of one of them –though a good wife and mother, of upright conduct- had the custom of being off and on in her attendance. Becoming faithful in attendance sometime ago, she made it possible for her husband to qualify.

The Gurabo church has been self-sustaining since its inception. After a few years, brethren there purchased a lot on which they constructed the building they now occupy.

…the scene is a mural hand-painted on the wall behind the baptistery, the middle panel somewhat in front of the side panels.

…the blue beam, with openings, is actually a part of the sound and video system. The open Bible is a three dimensional work of art done by an eleven year old boy of the congregation, and has to be seen to be appreciated. The enclosure behind it houses the video projector. A screen comes down in front of the baptistery. Hymns and announcements are projected, as well as illustrations for sermons and classes. Controls are in a niche in the back of the auditorium. All work done by local members.

…was built by Abraham Carrión, retired cabinet maker, now one of the three elders. 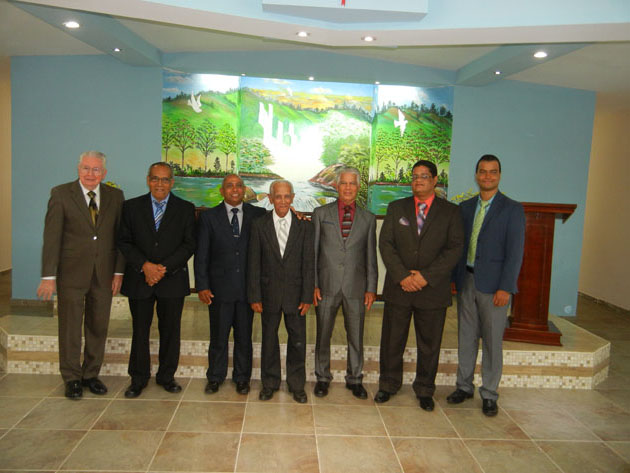 I am on the left. Next to me is Abraham Carrión Guadalupe, 74 years of age. Retired cabinet maker. Faithful member for 47 years. Outstanding preacher and teacher. Such a fluid delivery! Ample command of Bible teachings, with astute applications to the moral, social and religious situations of today.

[I flipped this picture horizontally in order to make identifications easier. In the original photograph, I was on the extreme right.]

After Abraham is Yuri Féliz Diaz, 54 years old; 27 years in the church. A native of Neyba, Dominican Republic. Agronomist by profession. A graduate of the Baxter School of Preaching, in Tegucigalpa, Honduras. Capable preacher, teacher and song leader. One of the teachers in the School of Advanced Bible Studies in San Juan.

Continuing toward the right, after Yuri is Félix Roldán Casillas, 84 years old; 47 in the church. A very good song leader, Félix also continues to preach and teach some. Félix and Abraham married sisters. Yuri married the youngest daughter of Félix.

These three men are the elders.

After Félix is Julio de Jesús Flores, 74 years old; 35 in the church. A licensed electrician, Julio worked for the Electrical Energy Authority until his retirement. He still does all kinds of electrical work, and seems to me like he can take care of just about anything having to do with maintaining properties! Certainly, he has helped us a lot here. He donates his time and labor to those unable to pay. Julio lives in Aguas Buenas, about four miles from where our family has lived for 38 years. He was converted through studies we gave in his home.

Next is Pedro Opio Claudio, 49 years old; 34 in the church. Pedro is the son of Pedro Opio, Sr., a pillar in the Gurabo church for many years, until his untimely death caused by cancer. Pedro Sr. worked for the Electrical Energy Authority, and his son followed in his steps. Pedro’s mother attends the Caguas congregation, Caguas being the city where she lives. When I first came to know this family some 40 years ago, they attended a Pentecostal, Sabbath-keeping church. Granted the opportunity to present studies in the open garage of the family house, the first basic subject was, as you might expect, on the change of laws brought about by Jesus Christ. Some members of that Pentecostal church attended one of the classes and tried to refute what I was teaching. The exchange became somewhat heated, and one of the images engraved in my mind is that of when they stood up and departed in a huff. But, Pedro Sr. and his wife understood, and obeyed the gospel. Two daughters are also faithful members in Gurabo.

These two men are the deacons.

At the extreme right is Jesús Germán, 35 years old. Converted in San Cristóbal, Dominican Republic when he was 14, the spiritual history of this young man is really inspiring. Growing up, he studied in a school for the preparation of church leaders in Santo Domingo. His secular, academic preparation is in the field of computer technology, with a specialty in protecting computer systems from illegal entry, etc. Outstanding is his mastery of this science, he was offered employment by a company here in Puerto Rico, and came, with his wife and child, three, perhaps four years ago, on a work visa. The Germán family started attending the Gurabo church, and have been a great blessing for that congregation. Jesús is a gifted teacher and preacher, and such has been his contribution to the congregation as teacher-evangelist that the elders, deacons and I wanted him at the front with us. Brother Germán is also teaching in the School of Advanced Bible Studies, in San Juan. 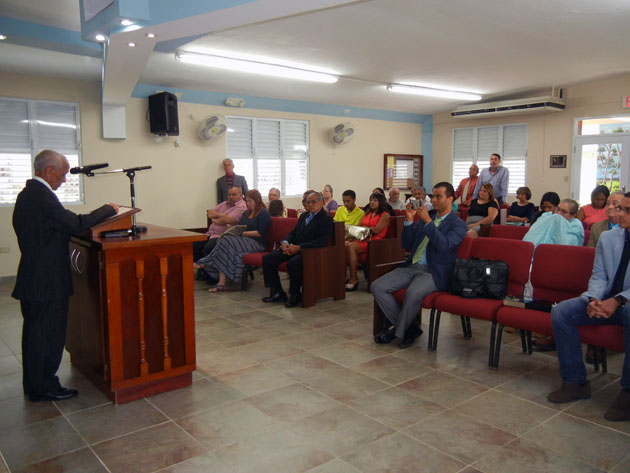 This picture is included to show a part of the auditorium of the Gurabo, Puerto Rico church. The ceremony for naming elders and deacons had already concluded and some had gone to a large room in the back where preparations were in progress for a fellowship lunch. For those still in the auditorium, Félix Roldán is at the front reading a special “spiritual poem” he composed for the occasion. 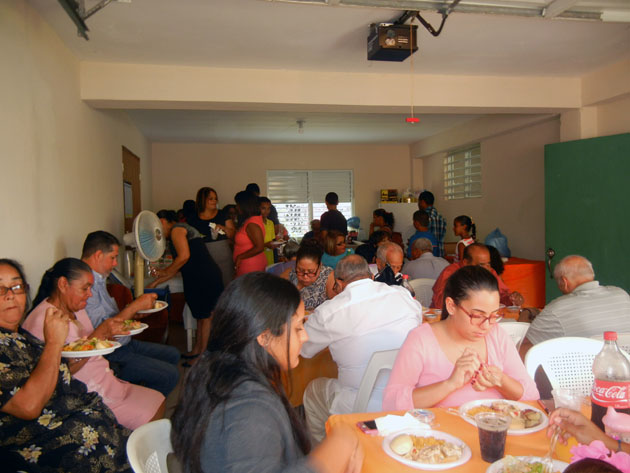 After the worship service and the ceremony to name elders and deacons those present enjoyed a savory, catered fellowship lunch. This room behind the auditorium is also used for classes. A tent and awning extended the seating area for the lunch. I could not get everybody in the same picture.

Lord willing, we will share more news with you very soon.

Your continued contributions for us and the work we do are, as always, very greatly appreciated.