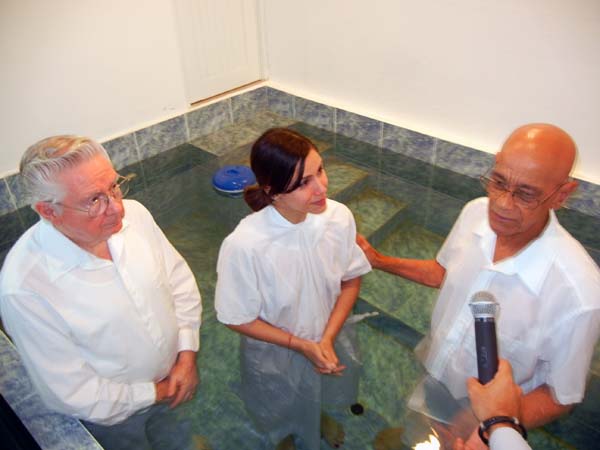 Ada Marie Torres Ventura is a 27 year-old school teacher. She is the daughter of Bro. Rafael (Tito) Torres and his wife, Sis. Debora Ventura [In Spanish-speaking countries, women who marry do not take the husband’s last name.] Debora is also a school teacher, and both she and her daughter teach at the same private school in Bayamón.

In the above picture, I am on the left of Ada Marie and Bro. José Álamo is on the right. Bro. Álamo, who will become one of three elders of the Bayamón church Dec. 6, Lord willing, has known Ada Marie since she was born.

Ada Marie is to be married Jan. 1, 2016. Sunday, Nov. 22, after services, she wanted to consult me about the wedding. Her fiancé is from a Roman Catholic family. During our conversation, at one point she said: “I’m getting married, but I want to continue in this congregation.” Now, Ada Marie has been attending church since she was a child, but to the consternation of many of us, and particularly to that of her father, she had not taken the step of being baptized. Responding to her statement, I said: “If that is your desire, why not be baptized so that you may be become a Christian in full-standing with the congregation? I have observed your interest in the subjects taught in the young adult class, and how you sing with the congregation, and you are such a fine, young woman.” To my surprise and joy, she began crying, saying through her big tears: “That is what I want! I have been thinking about it, and that is what I want to do.” Ada Maríe explained that as a teenager she was not very happy with the church of Christ because we do not have instrumental music, but as she grew older, hearing more and more sermons and being in classes, became convinced that we are right, saying: “I saw that what is done here is just what the Bible says.” As a matter of fact, she convinced her fiancé not to have a Catholic wedding.

Ada Marie and I were at the front of the auditorium, her mother was nearby, while Rita and Bro. Álamo were out on the porch. I suggested to Ada Maríe she could be baptized then and there, if she so wished, but her father had already left on some job-related matter and she wanted him to be present. Plans were made for Sunday, Nov. 29, and that is when her baptism took place. Her father was directing the singing on that Sunday. After the sermon, he went to the pulpit and announced the invitation song. Before he even began, Ada Marie had already walked up to the front where Bro. Álamo was standing. Tito, her father, looked over at the two. Apparently, could hardly believe what he was seeing. Looked away for a second. Looked back again, and that was the end of his leading the invitation song! He went down to his daughter, embraced her and stood there with her, while Bro. Jorge Ginés López, who had just preached, led the invitation song. Ada Maríe had not told her father she planned to be baptized, wanting to surprise him. It was a highly emotional moment, with half the congregation crying for joy. 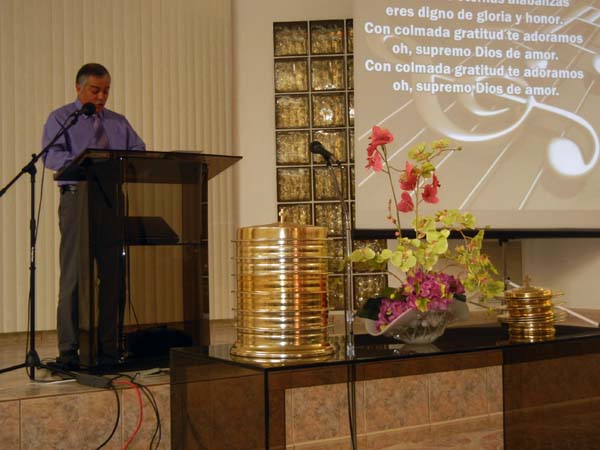 Rafael (Tito) Torres directs the singing before the sermon, Nov. 29, 2015, in the meeting place of the Bayamon, Puerto Rico church of Christ. This talented and dedicated brother also preaches and teaches classes. Lord willing, he will become one of three deacons of the congregation in a ceremony programmed for Sunday, Dec. 6. Tito completed requirements for a Six Year Certificate offered by the School of Advanced Bible Studies of churches of Christ in Puerto Rico. He has begun teaching in the School. 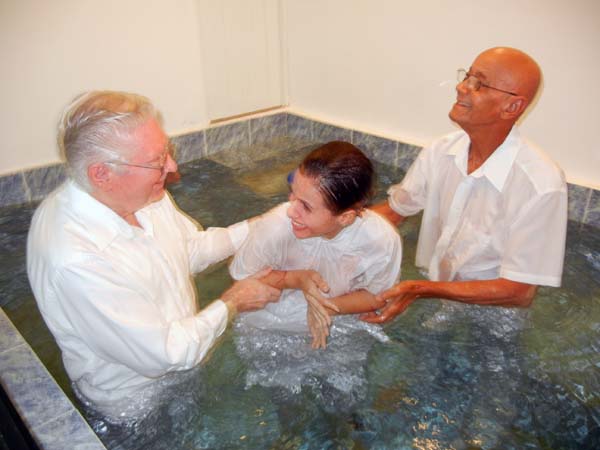 Ada Marie came up out of the baptismal waters with a smile of pure joy, as the whole congregation also rejoiced with her. 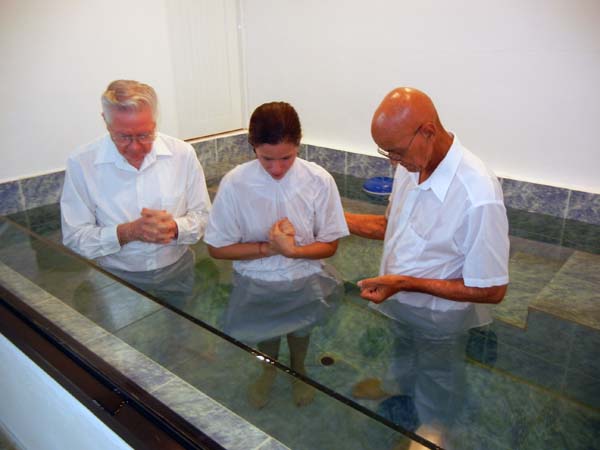 We remain in the baptistery after the baptism while Bro. Jorge Ginés López leads all in prayer, especially for Ada Marie.