The Houston Bible Seminar is conducted each year for Spanish-speaking Christians. This was the fifteenth consecutive year for the event. Most who attend are from Texas and northern areas of México. Several vans come loaded with people from the Mexico-Texas border. A number of church leaders share the responsibility for preparing programs, selecting speakers, etcetera, and various congregations, both English and Spanish-speaking, contribute to cover costs.

Outstanding among those who promote the Seminar is Bro. Fernando Corrales, of Houston. An architect by profession, Fernando, forty years old, preaches regularly for one of the Houston area Spanish-speaking congregations, a work he himself, with two ladies, began, and which now counts about 100 in attendance.

On behalf of the Seminar organizers, Fernando has invited me once and again to participate, and this time I accepted. He also graciously offered me the hospitality of his home during the time I would be in Houston.

This year, the Seminar was held in the Channelview church of Christ building.

Fernando picked me up at the Houston International Airport, Wednesday morning, April 1. He had some errands to run before the opening service of the Seminar that night, and I saw a lot of the Houston area in a short time! Mostly oil refinery after oil refinery. Really amazing! Especially at night. As far as the eye can see in some directions. Fernando said it was that way for fifty miles, all the way to Galveston, on the Gulf coast.

Up to 485 in attendance. Two baptisms and three restorations. 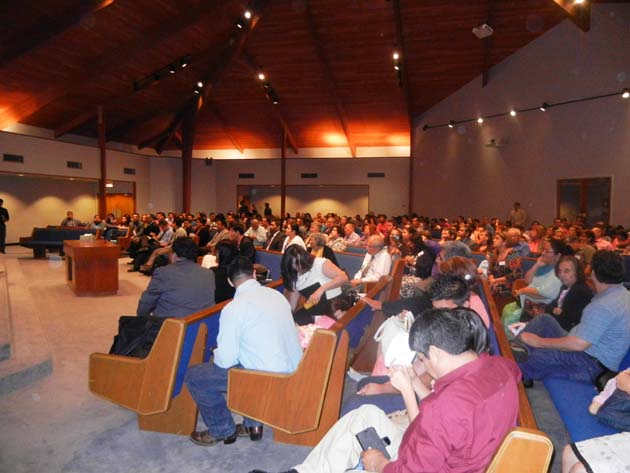 This year’s theme was “Questions of the Bible.” I was assigned two conferences, and my questions were, for Thursday and Friday, respectively, at 4 p. m.: “Am I my brother’s keeper?” (Genesis 4:9), and “Lord, to whom shall we go?” (John 6:68). In Spanish, of course. To be sure, I spent many long hours preparing the messages, praying they would have a positive impact. Judging from numerous comments on their content and presentation, I conclude they were, indeed, satisfactory, and for that I am truly grateful to God to whom I continually look for mental and spiritual strength. I was the only American on the program. And, the oldest of the speakers! A fact I used to poke a little fun at their having selected me for the difficult hour of 4 p. m., when perhaps most listeners would be tired and hungry. The full texts of the messages, in Spanish, are available at www.editoriallapaz.org/sermon-guarda-de-mi-hermano.html and www.editoriallapaz.org/sermon-A-quien-iremos.html

For Thursday and Friday, conferences and other activities began at 9:00 a. m. Five conferences each day, with speakers from different places. Two sessions, one in the morning, the other, in the afternoon, were dedicated to teaching those present how to sing better, including four-part harmony. Alberto Suárez, who can sing the four voices, was outstanding in his ability to instruct and get the large audiences to actually practice what they were being taught. He is a full-time minister in a Texas congregation. Two hours for lunch. An hour for the evening meal. Breakfast was available before the first conference. Many of those who came stayed in the homes of area members.

The conferences were broadcast live on an Internet radio station. When I talked with the brother who operated the equipment, he explained the program he was using indicated where people were listening. At that moment, he mentioned Argentina, Chile, and, to my delight, Puerto Rico!

Some of the “theme questions” were particularly suited for evangelistic-type sermons. My perception of the Seminar changed somewhat when I learned 30 to 40 of those attending were not members of the church. Of that number, two ladies, both from Mexico, were baptized. There were also three reconciliations. 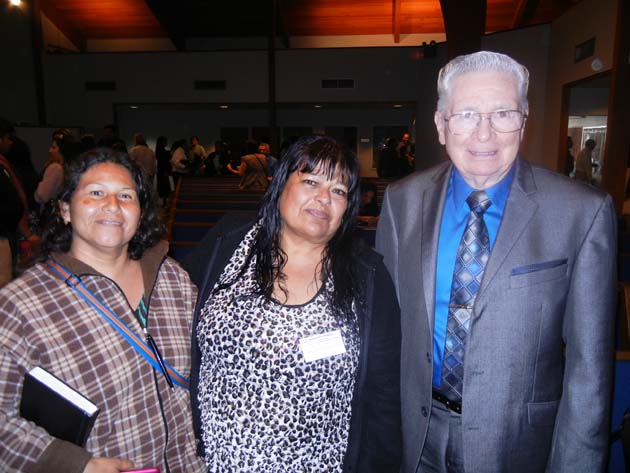 Two ladies from Mexico were baptized Friday, April 3. After the last conference, I was at the front of the auditorium where many pictures were being taken of the speakers and different groups, including these two baptized that afternoon, and took advantage to have my picture taken with them. Though one of them responded after my message on Friday, I would think her decision was due to all the good sermons she was hearing. 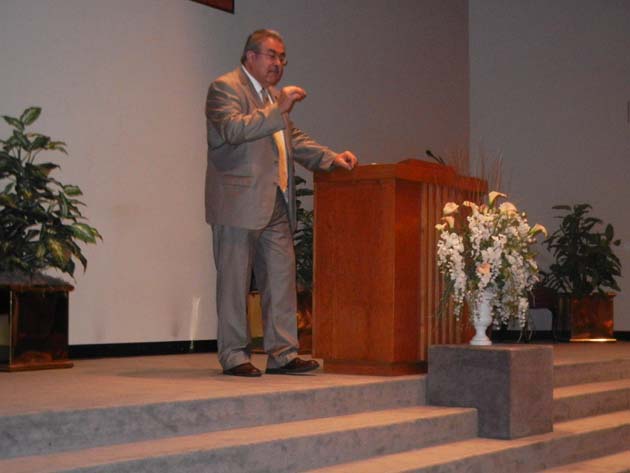 Bro. Edilfonso Rodríguez, of Corpus Christi, Texas, presented the three evening conferences. His three sons are full-time preachers. In addition to being an evangelist, Edilfonso is an elder of a Corpus Christi congregation. He is the most perfectly bilingual preacher I have ever heard. For the opening, bilingual service Wednesday night, April 1, he translated himself! And a masterful job it was. Hard for me to decide if he is a better preacher in Spanish than English, or vice versa. Thursday and Friday nights, Edilfonso preached only in Spanish. A dynamic speaker, he presented his three messages without a visible outline. Citing text after text in support of the completely biblical content. 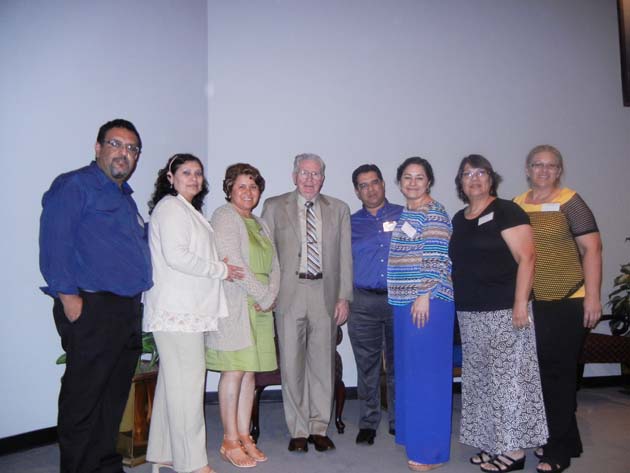 These brethren and sisters wanted to have their picture taken with me. And so did many others! Dozens and dozens, as a matter of fact, during the two, full days of conferences. Even young people!

Many of those attending knew of me through the considerable quantities of literature and cassettes we sent to Mexico during about thirty-five years, and not a few through the Internet site, www.editoriallapaz.org, we have maintained since 2003. Their expressions of appreciation were very uplifting to me. I wish those of you who have supported our works for these long years could have heard all of them. Brethren who write to express gratitude are surely only a very, very small percentage of all who receive benefit from the materials and the Internet sites. I remember one brother, in particular, who said: “I love the site editoriallapaz. I go on it all the time.” A brother –I did not even know him- who introduced me for the Friday conference said I was a “legend”, observing that so many turned to my “notes,” as he called them, for use in various ways. Really, I feel somewhat uncomfortable repeating this for you, but how else can I convey to you what the works done by us –by you as providers of means and by us as instruments of God on the field- have meant, and do mean, to literally multitudes in the Spanish-speaking world. As for me, I assuredly know from Whom my strength cometh, constantly giving Him the praise and glory.

If I may be allowed a little more indulgence in this same vein, after my first conference, and the second, a number of listeners, including some preachers, came with words of praise, both for the content of the messages and the quality of the Spanish used to present them. Needless to say, this validation of my ability to effectively communicate God’s truths verbally in Spanish is of great importance to me. At one point after the Thursday conference, a group of several men and women formed around me, making positive comments about the lesson. Including, the breadth and aptness of the vocabulary used. I thanked and praised the Lord in my heart, giving him the glory before those present. One brother remarked: “You are on a level apart,” naming a couple of other preachers he considered to occupy that same ground. God knows I am not boasting. Just trying to give you an idea of how at least some Spanish-speaking brethren see me. My overriding desire is to be useful to the Lord, and a blessing to His people. 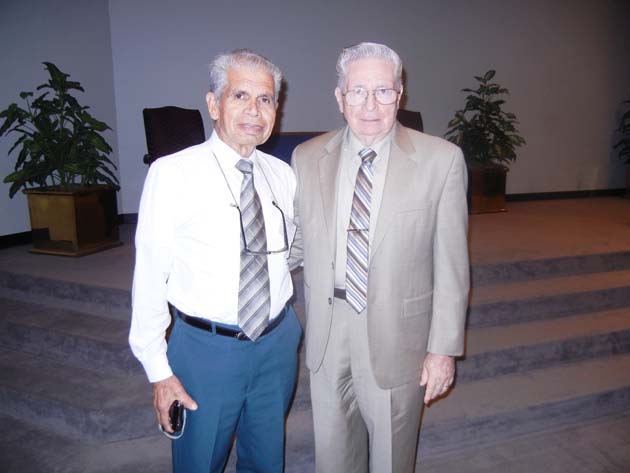 This brother and I are about the same age. (Wish I had written down his name.) He has been preaching in northern Mexico for some forty years, and is one of a large number in that country who received quantities of tracts, booklets, books and cassettes from us.

Talking with some of the brethren from Mexico, I asked if the church in that country was still growing. “Yes:” was the consensus. Monterrey was cited as an example. There are more than forty churches of Christ in that large city! 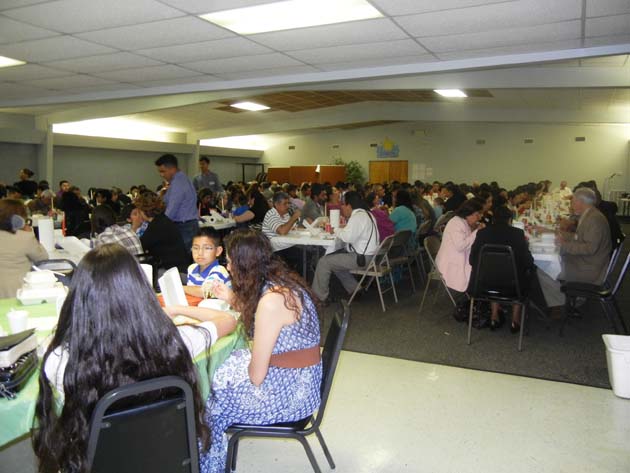 In this commodious fellowship hall of the Channelview church, hundreds ate breakfast, lunch and the evening meal each day. Food, prepared by local members, and drinks were already on the tables when the hour came to eat. Very good organization and attention to details were evident throughout the Seminar.

When I sat down to eat one evening, two or three brethren from Mexico came to the table, wanting to consult me about controversial matters causing strife, and even division, in some of the congregations of the areas where they are members. That was the end of my meal! We spent the whole hour talking, a conversation that helped them, as they said, to clarify some doctrinal points.

Each night, the auditorium, kitchen and fellowship room were left spotlessly clean. Fernando Corrales was on top of everything! We would get to his house, twenty-two miles from the Channelview building, at 11 p. m. to 12 p. m., and Friday night, at 1 a. m. But, not before stopping at Dot’s, a restaurant about a block from his house, open all the time! So popular that even at those hours we would have to wait fifteen to thirty minutes for a table.

From country to country, there are variations in the Spanish vocabulary, especially for foods, and even in terms related to time. When, in the morning, Fernando asked me if I wanted to “almorzar”, I thought that strange, for to me that verb means “eat lunch,” and we had not yet breakfasted! He explained that in parts of Mexico “almorzar” means “to eat breakfast,” while in other areas of the country the verb is “desayunar,” the term we use in Puerto Rico.

All in all, the Seminario Bíblico de Houston was a great experience for me. Emphasis is very definitely on “sound teaching,” and this was quite evident in the messages I heard. 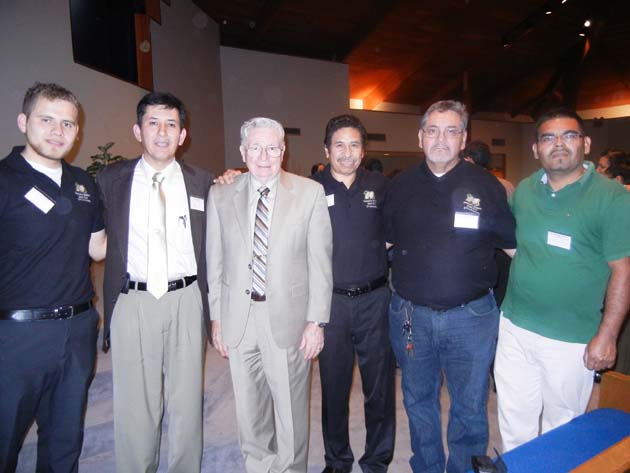 Here I am with some of the younger men who attended the Houston Bible Seminar. To my right is Bro. Alberto Suárez, who directed the four sessions dedicated to teaching us how to sing better. A brother in Mexico has written a number of hymns, with four-part harmony, and a couple of these were used.