A comparatively small part of the San Juan, Puerto Rico metroplex. To the left, most of the larger buildings are hotels. To the right, most are condominiums and office buildings. 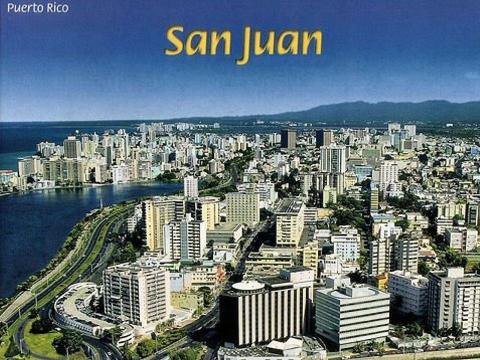 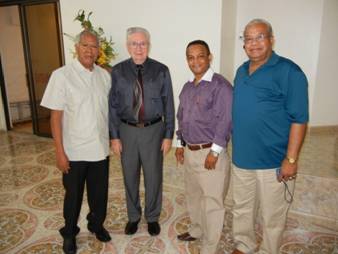 Miguel Molina, left, standing with Dewayne Shappley, Bro. Chico and Bro. Orlando Rivera, at the front of the Bayamón auditorium. Bro. Molina, converted in August, 2010, through our Internet site, has quickly become a pillar in the Los Mina church, in Santo Domingo, according to Bro. Pascual Pérez, who baptized him. Miguel and Chico visited the Bayamón church recently. The Internet also played a part in the conversion of Orlando Rivera, on the right, baptized in Bayamón. Orlando is now married to Eunice, daughter of Pascual Pérez. He is a supervisor of the main post office in San Juan. 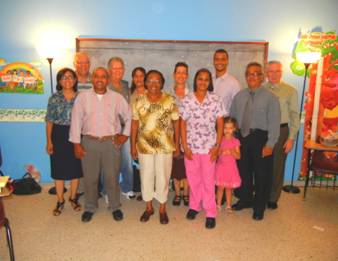 Postgraduate class at the School of Advanced Bible Studies in San Juan, Puerto Rico. Sis. Wanda was on a trip when this photograph was taken. Yuri Féliz (front, left) is a graduate of Baxter Institute, in Tegucigalpa, Honduras, and also has a degree in agronomy. He teaches some courses at our School. Eulogio Pantojas (front, right)  has a Six-Year Certificate from the School and now teaches some courses. Jesús Germán (back row, tallest), converted in the Dominican Republic, studied in a Bible School in Santo Domingo. Now employed by a cellular phone company in Puerto Rico, Jesús is an excellent student. His wife, Carmen, is taking the Two Year courses. I am on the right, and guide this group in three sessions each Monday night. The rest of those in the group have Six-Year Certificates from the School, except, of course, for the little girl, Eyye, Jesús’ daughter. 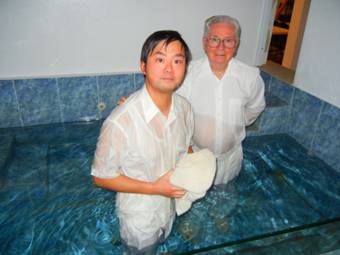 Albert Ksia baptized by Dewayne Shappley in Bayamón, Puerto Rico. Born in Missouri, of Taiwanese parents, who now live in California, Albert is an optometry student at the Inter American University in Bayamón. He is a very courteous, respectful, pleasant young man. 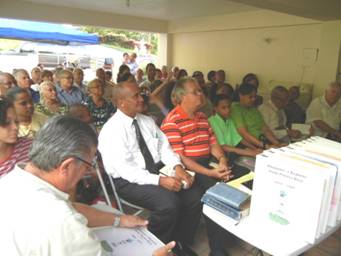 Some members of the Gurabo, Barrio Cubuy and Loiza churches met on a Sunday afternoon at Juan and Lucy Camilo’s house to celebrate the establishment of these congregations some forty-one years ago. I was asked to speak, and given the purpose of the meeting, began by referring to my many memories of those years, showing those present the volumes of reports I have prepared. On the left, with his back to the camera, is José Rodríguez, an elder of the Barrio Cubuy church, holding one of the volumes. The man on the front row, with the white shirt, is Bro. José Vizcarrondo, of the Loiza church. Since his conversion a few years ago, José has become a very able preacher and leader. 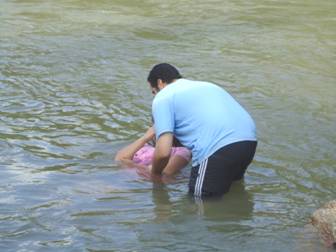 Ronald Sabino, reached through our Internet site, baptizes a person en Ocaña, Colombia. Compiling data received through e-mails Ronald has sent since his conversion, I estimate he has been responsible for 55 to 65 baptisms in a little more than two years. 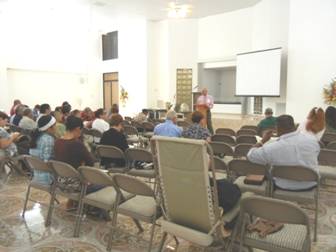 Bayamón, Puerto Rico, church of Christ. Bro. José Álamo teaches the “Mature Class” in the main auditorium. Attendance for the class is from 27 to 37, or so. The oldest member, Bartolomé MaClara, is 91, and attends regularly. 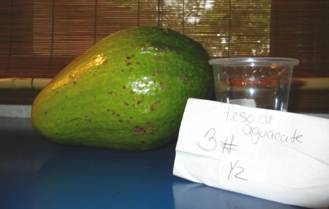 This avocado, the only one left on Bro. Maclara’s tree after tropical storm Irene went through, grew to an amazing three and half pounds. Bro. Maclara always gives Rita avocados off that tree, and so it was that she received this one. And it was as delicious as it was big! Lasted us days. 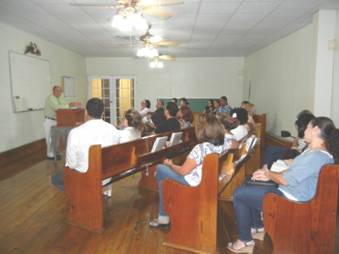 Bayamón, Puerto Rico church. Bro. Alfonso Estrella teaches the Young Adult Class in a large room on the second floor. His main subject for the period he taught had to do with marriage, divorce, living together without being married and related matters. Four of us take turns teaching this class. 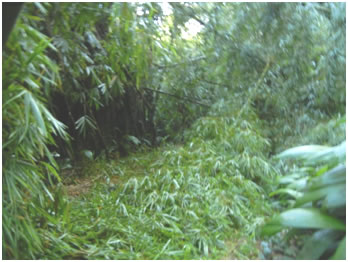 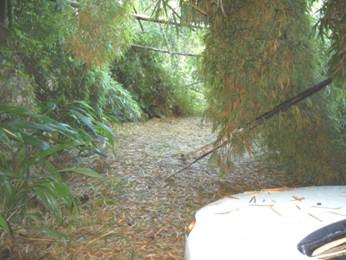 Well, I do not know exactly how to classify Irene. It came in as a strong tropical storm, but was reportedly a hurricane by the time it left Puerto Rico. At any rate, the damage was considerable in places –many trees down and much flooding. The previous two pictures are of the lane to our house as we found it when arriving August 30, 2011 from a trip to the U. S. The following two show the lane after I had cleared away some of the bamboo obstructing it. Though as of this date I have removed the bamboo lying across the lane at a lower level, there is still a quantity at a higher level more difficult to reach. I am about ready to attack it! 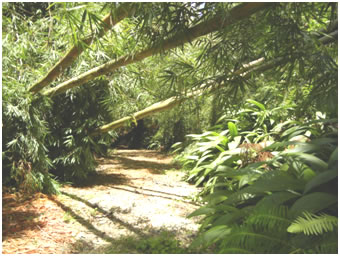 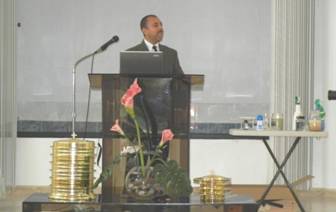 Previous picture. Jorge Ginés presents one of his object sermons in Bayamón. This one was on “Pleasing odors”, and took some interesting and very edifying turns. Jorge used texts and examples from the Old and New Testaments, where both pleasant and unpleasant odors are mentioned, as well as examples from everyday life. The Bayamón church is blessed with four or five really capable preachers whose sermons during the last couple of years have been, consistently, of high quality. Four or five more can do a passable job. As I listened to Jorge, I kept wondering why I myself had not thought of that subject! 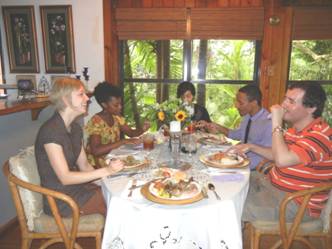 2011 Thanksgiving dinner at the Shappleys in Puerto Rico. Five Americans and one Canadian, university students at two universities in Bayamón, ate dinner with us, then stayed the afternoon and into the night, eating again before returning to their lodgings. Rita prepared some truly gourmet courses for the event. Then, the group spent time “networking” and playing games, in particular, Gestures. Rainy weather kept us from going outside. On the right, Vincent Gamuzza, from New Jersey, baptized at the age of nineteen, fourth year optometry student. Next, Aaron Rahe, from Georgia, first year optometry student. At the end, Huba, from Canada, optometry student. Next to her, on the left, Chay Farley, from Mursfreeboro, TN, member of the church. And, on the left, front, Abigail Degnes, from Madison, WI. That full plate on the front end of the table belongs to Albert Ksia, from California, first year optometry student, who was baptized in Bayamón, December 5, 2011. Chay and Abigail are studying to be Medical Assistants.

Church of Christ en Córdoba, Alberdi, Argentina.
This picture was sent to us in July, 2011, together with pertinent information, to be placed in the “Directory” for Argentina on our Internet site